What is Multivariate Testing?

Editor note: Please note that we use button colors, fonts, and headlines as a way to clarify the concept of testing. Successful AB and multivariate tests will include more sophisticated changes to your page.

Multivariate Testing or MVT testing is the process of testing multiple variations of multiple elements on a webpage with the goal of determining the best combination of different elements on the page to increase conversions.

In this example, the software tests different variations of the page headline, image, and the “call to action” button: 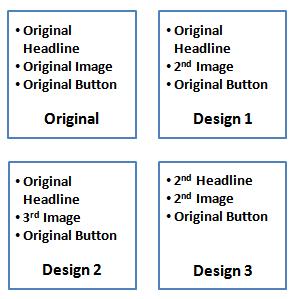 You can calculate the total number of challengers in a multivariate test multiplying the number of different variations of each of the elements.

For a webpage in which we will be testing (N) number of elements, we calculate:

The number of page variations can grow very fast. Some testing software allows you to tens of thousands (sometimes millions) of variations of a single page.

Let’s take the product page from apple.com as an example: 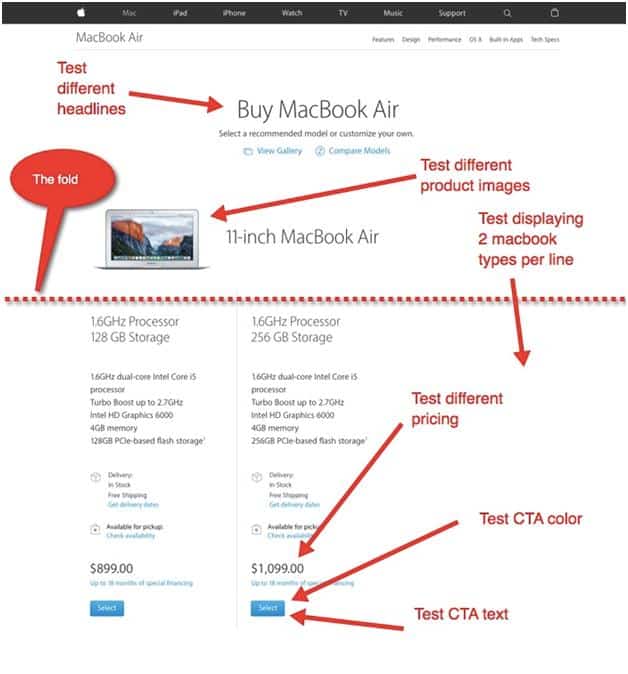 On this page, you can test:

Let’s take an example from salesforce.com: 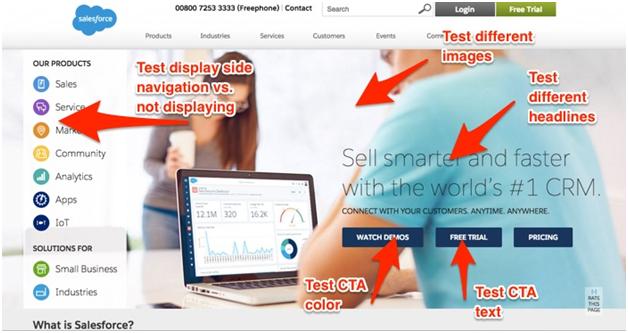 On this page, you can test:

Suppose you’re just getting started with running tests, it can be pretty confusing. On one hand, you’ve got A/B tests, on the other you’ve got multivariate testing. You don’t have to be confused about which to go with, here are the differences. 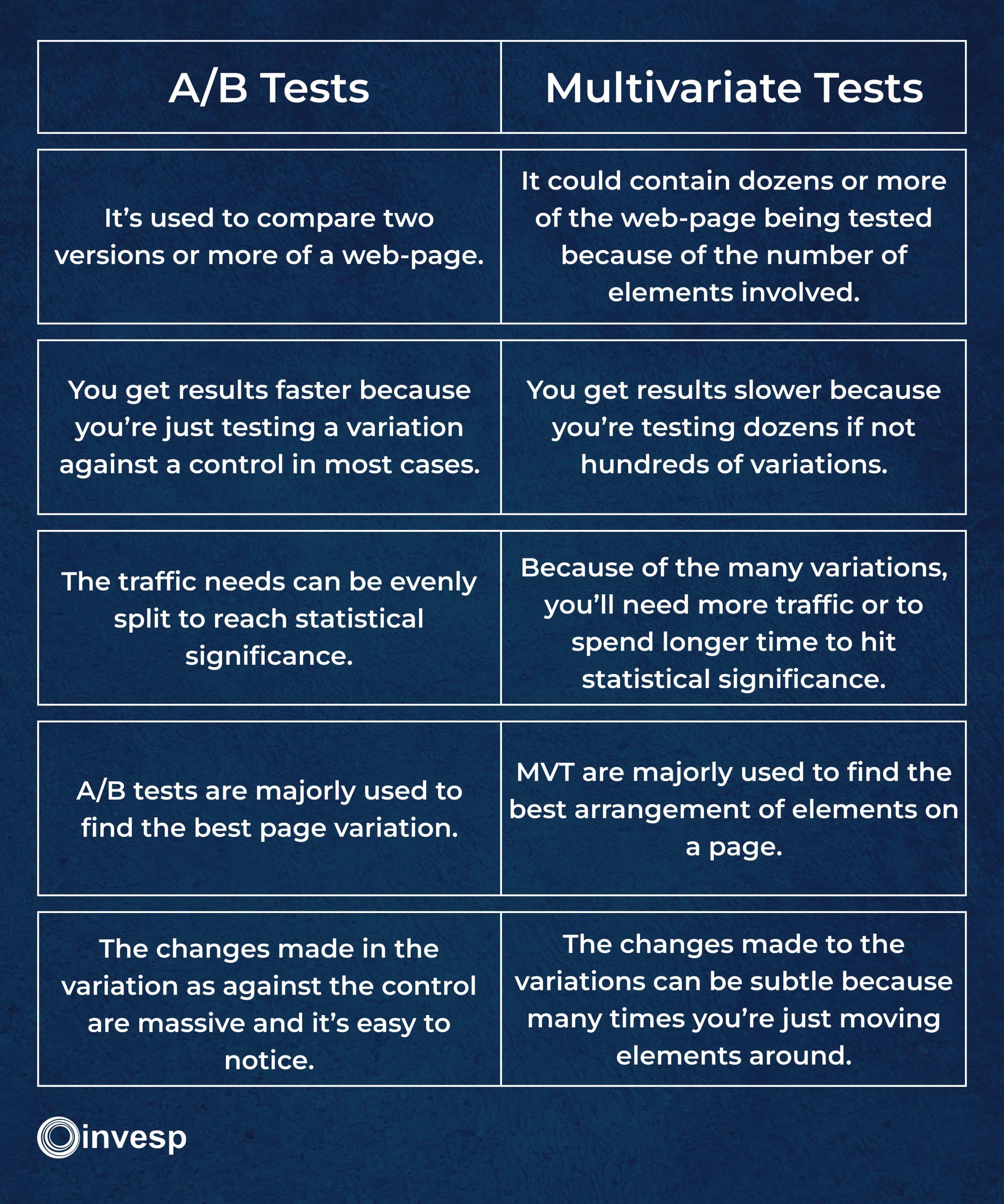 How to create a successful multivariate test?

But that is the easy part!

Poorly designed experiments can take years to conclude. Even worse, they might not provide accurate insights into what elements convert more visitors into customers.

You will most likely find yourself relying on guesswork to determine which versions to include in the test. The same logic, of course, applies to all elements you want to test on a page.

Without being judicious with test scenarios, you might end up attempting to test millions of combinations.

Testing is an essential component of any conversion optimization project. However, it should not be the only component. Testing should only take place after the conclusion of other equally critical optimization stages, such as persona development, voice of customer research (including polls and surveys), heuristic evaluation, usability testing, site analysis, and design and copy creation. Each of these elements provides a building block towards a highly optimized website that converts visitors into customers.

To create a successful test, you must go through the following steps:

The results from running multivariate testing

While MVT testing is powerful in helping online business increase conversions rates, the results you will achieve from running a single test may vary.

You can choose different approaches to design and create your multivariate test:

2.  Page level testing: in this type of testing, you test multiple page elements at the same time. As an example, you can test different page layouts, and/or a different combination of elements and so on. Page level testing requires more effort from the development team to implement and it generates a higher impact on your conversion rates compared to element level testing.

Carefully designed page-level testing can produce anywhere from 10% to 20% increase in conversion rates.

3. Visitor flow testing: in this type of testing, you test several navigation paths for visitors within your website. As an example, an e-commerce website might test single step vs. multi-step checkout. Another example is to test different ways visitors can navigate from category pages to product pages.

Visitor flow testing can get complicated quickly. It typically requires a higher level of effort from your development team to implement. Done correctly, this type of testing will have a higher impact on your conversion rates compared to page-level testing.

When people talk about multivariate testing, they’re usually referring to the full-factorial mvt. In this type of multivariate test, the traffic is distributed equally among every variation.

Let’s say for instance you’ve got 10 variations based on the number of variables you’re testing and the page has 1000 unique visitors. When you do your math, an equal distribution of traffic here means every variation gets 100 visitors.

Now, because each variation gets the same amount of traffic, this test type is best for determining which particular variation performed best.

Much more than finding out the winning variation, it allows you to single out the element in the variation that had the most impact in improving the conversion rate.

The name gives it away. Unlike the full factorial testing that requires all of the variables to get traffic to drive result, with fractional factorial, only a subset of the variations gets the traffic.

The other variations don’t get traffic while their conversion rates are inferred from the ones that got the traffic.

This mvt testing type requires some hard maths for conversion rate inference and assumptions for the variaitons that didn’t get traffic.

Professional tip: I’ll advise you always go with the full-factorial multivariate test. This provides you with data that is better than inferences.

Do’s and Don’ts Of Multivariate Testing

1. Decide which sections should be included in the test: not every element has the same impact on the conversion rate.

Suppose you included a headline, a testimonial section and a footer, you might come to realize that the footer section has little to no impact on the conversion rate of that page or user engagement.

It’s an important factor in the conversion impact of elements and sections.

2. Preview every combination: this is a mistake even mature experimenters make atimes. They forget to preview the product of the element variations.

This is important because you don’t want to have a variation where the header reads 20% off while the call-to-action button reads free samples. Both messages in this variation are incompatible. Previewing helps you detect these errors and remove them.

3. Estimate the traffic for significant results: having ten variations for a page that gets a hundred visitors will take a lot of time to achieve statistical significance.

To avoid running tests that the results would be invalid before it’s ready, learn to estimate the amount of traffic that will be required.

1. Don’t include a lot of sections or elements: the more elements and sections you’re testing, the more variations you get. The reason this is a big deal is that when you test a lot of elements that increase the number of variations, you’ll need a lot more traffic to get statistical significance.

The Pros Of Multivariate Testing

2. You better understand the impact of individual elements on conversion rate.

3. Saves your time because you don’t have to conduct individual A/B tests.

The downsides of multivariate testing

If you are not careful with planning your multivariate tests, you will end up with weak-quality tests that take too long to implement and produce neither results nor insights.

You must always remember that testing (AB or multivariate) is only one component of a conversion rate optimization work.

We have seen many companies that entirely relied on testing software without doing an in-depth analysis of what they were testing. Our 2007 article on the case against multivariate testing points out this example:

Let’s do some simple math.

For each element, you will choose four different options. This means you will have a total of 4^6 = 4,096 possible scenarios that you will have to test.

As a general rule of thumb [being more aggressive], you will need around 200 conversions per scenario to ensure the data you are collecting is statistically significant. This translates into 4,096 * 200= 819,200 conversions.

If testing 4,096 variations sound difficult, imagine how complicated matters will get by adding variation in campaigns, offers, products, and keywords. Yes, running that many test variatins is not unheard of for many larger websites.

When creating an MVT test, keep these possible problems in mind:

1. Be aware of creating the test without paying close attention to the hypothesis behind it

2. Be mindful of the number of variables you are testing and their dependency on one another

3. Be aware of the length of time it will take to complete the test to a statistical significance

In the case of an A/B test, you could easily split the traffic 50-50 between the control and variation, for a multivariate test, it’s not the same. Because you’ve got more variations to test, it’ll take a longer time to reach statistical significance because the traffic won’t be evenly split, it could be 5% to a variation, 10% to another variation, etc.

Professional tip: Before running the MVT project the sample size per variation. If the traffic on the page you want to test won’t be good enough to achieve statistical significance, I suggest you go for an A/B test.

5.  Complexity in analyzing results: A/B tests are simpler to understand, especially in the analysis of the result. You have ann hypothesis driving the A/B test, you can easily deduce why the control won or didn’t.

This is not the case for a multivariate test. A variation has many elements working at the same time, so they analyze the result requires some mental gymnastics because you need to explain how the individual elements interact.

Take me to Previous Chapter
Take me to Next Chapter